Amman, Jordan — Arrival and Day One. Or, Cheryl Gets Happy at a Hamman

The flight on Friday was just over two hours from Athens.  We landed about 6:15 p.m. and were met by someone who helped us through the Visa and Passport Controls.  Upon exiting there, we picked up our baggage.  I changed some money first, and then it was off to the hotel.  A new twist:  upon our exit, we had to put our baggage through a metal detector machine.  Following our representative from the travel agency, we walked a short way and met our driver.

The airport is about 35 minutes out of Amman. We landed at Queen Alia International Airport, named for the third wife of the late King Hussein.  She was killed in a plane crash near the site of the airport.  Our ride to Amman was on a road less than 2 years old, and a new road was being constructed right beside it.

Farming surrounded us as we dr0ve.  Large-scale farming of vegetables, I’m told, is intense in that area.  We saw huge homes as well as shanties and tents.  Once I saw a group of camels.  The land looked as I imagined that it might — while there is green (trees of different types, mainly), there wasn’t grass.  Rather, the soil itself was part of the color scheme — sandy and rust-colored.

Amman is the largest city in Jordan as well as the capital.  The city’s limits are spreading and much building construction can be seen everywhere.  As of 2008, somewhere around 2.2 million people live in Amman, with another 850,000 in surrounding communities.  The country’s population in 2008 was about 6.2 million people.  No wonder there’s building going on everywhere in Amman.

Amman grew up around 7 jebels, or hills – and is compared to Rome as a result. Now it has spread and encompasses more than 20.  Jebel Amman is the main hill.  Navigating the city is a mystery to me — I know there’s some clue with the roundabouts that are numbered.

However, I am clueless.  Yesterday when I went out with a few others for shopping in the morning, we took a taxi.  After shopping in the gold souk and spice and food souk, we went separate ways.  One group headed back to the hotel.  Another woman from the group and I sat and had soft drinks and water, grabbed a taxi, and I gave the taxi driver the paper the receptionist had written for me with the name of our destination: the Al-Pasha Turkish Bath.

Apparently the most famous of the Turkish baths, the Al-Pasha lies near Rainbow Street and close to the Ahliya School for Girls.  Our driver got us to the area, but then had to stop several times and ask for directions.  Believe me, I could understand why — I really couldn’t find a lot of street signs.

Before too long, though, we were there.  We were early, since our reservations were for 4 and it was just after 2.  However, that didn’t seem to be a problem and in about 15 minutes, we were in our swimsuits and heading into the hammam.  The Turkish baths were an Ottoman tradition, based on earlier Roman and Islamic designs.

This hammam, as is common, allows women in at a separate time from men.  I’d been in one in Istanbul almost 10 years ago, and I was determined to find another one.  This hammam was extraordinary.

As soon as I entered, I was directed to shower and then ushered into a steam room — marble, of course.  Armed with a glass of iced hibiscus tea, I sat and sweated profusely.  I was more worried about slipping on the marble and not being able to complete the afternoon than I was about the heat.  The steam rose to the domed ceiling in which multicolored glass circles allowed light into the small space.  With enough steam, it was possible to simply forget about any outside world at all.

Next, I was told to shower again and then enter the jacuzzi.  I removed my plastic slippers and carefully grabbed the rail as I stepped up and then down into the jacuzzi.  Once more the steam from the water rose and hovered.  I sat for a few minutes and then moved even lower in the water, until only my head was above the surface of the water.  I could have stayed there, but I didn’t.  The lights — rather arabesque metal lanterns with electric bulbs — softened the shadowed area.

Once out of the jacuzzi, I was led to a marble slab on a solid, raised marble rectangle.  It was time for what I term the Brillo pad experience.  Probably, it was a loofah.  It just felt rougher.  This is where the attendant carefully removes dead skin cells by quickly and rhythmically scrubbing every square inch of the body.  I think I lost a layer of skin by the time it was over.  I began by lying on my back and then changed so that I was face-down.  I had no idea about anything other than the experience itself.  Even with the scrubbing, I almost fell asleep.

When the last bowl of water was sluiced over my head, I was helped off the table.  I assumed that was it, but no — I was then moved to another marble table.  It was time for a massage.  Once more, the quiet broken only by the sounds of the oil being massaged over me and by voices that seemed distant, I nearly fell asleep.  Time simply had no meaning.

The massage over, I thought it was time to go back up front, but was mistaken again.  I was led to a sauna, and directed to stay for 10 minutes.  By the time I got out of there, I wasn’t sure that my legs were going to work.  That’s how relaxed I was.

Once more going to the shower, I shampooed my hair and body.  As I headed back to the changing room, I was handed a huge white towel — nice and warm.  I toweled off, changed, and sat in a small room with a fish tank.  TAhere I was given a small glass of mint tea.

I exited, paid the really cheap rate for the heavenly experience I’d had, and met with the other woman from our tour.  We walked to Rainbow Street, finally got a taxi, and headed back to our hotel.

The hotel, the Al Qasr Metropole, requires entering guests (or indeed anyone) to place any purses or backpacks or bags on a belt so that they are subjected to metal detection.  Just a precaution made necessary by a few bombings of major hotels several years ago.  I happily placed my backpack on the belt, stepped through the metal detector myself, retrieved my backpack, and took the elevator to my room.

It was time for a nap.  Drinks and dinner later (at the hotel).  Back in the room and in bed by midnight.

Shopping in the gold souk and then a hammam.  Not a bad first full day in Amman! 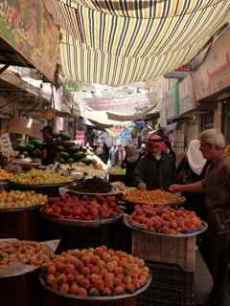 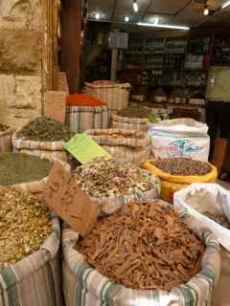 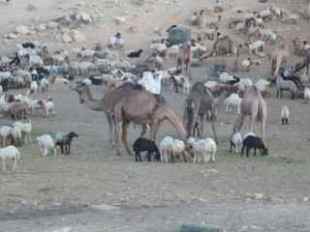 2 thoughts on “Amman, Jordan — Arrival and Day One. Or, Cheryl Gets Happy at a Hamman”