Traveling and Time for Observations

So I missed writing yesterday.  I slept most of the day — sort of like the day after a migraine, only for sinus issues.  I completely forgot about writing — and just slept.

But I took a lot of time yesterday to think and today as I tried to move and organize some digital photos from this summer, I realized that some of the time when I travel I simply sit and watch what’s going on around me.  Certainly I watch people — that’s always fun — but I also enjoy quieter moments when I focus on landscape and (often) cats.  And dogs too.  In Athens they’re everywhere, wandering around, lying in the shade under trees or on steps or by stores.  I found that it was similar in Istanbul, too.  Birds flying — and sometimes landing — also provide me with lots of opportunity for observing and thinking.

These are just random events, tied together by nothing other than my presence.  They’re there for anyone and everyone to see, if only people take the time.

You expect to see cats and dogs in the country, but somehow it’s a surprise when you first realize just how many cats and dogs wander the streets and neighborhoods in Athens.  It’s a huge city, filled with cars and motorcycles, trolleys and buses.  Yet look around you.  One dog seems to show up at all the demonstrations in the center of Athens at Syntagma; it’s recognized — and even has had its photograph published.

SIt on a bench or at the cafe in the National Gardens — there are literally dozens of cats there.  People bring food to them.  Dogs live there too, and are well fed.

Even when I walk on the street, I can look down and there’s a dog or a cat lazing in the shade — whatever shade it can find — on a sweltering day when the sun is beating down.

At the site of the Agora, on the street, they sprawl, the Acropolis above them. 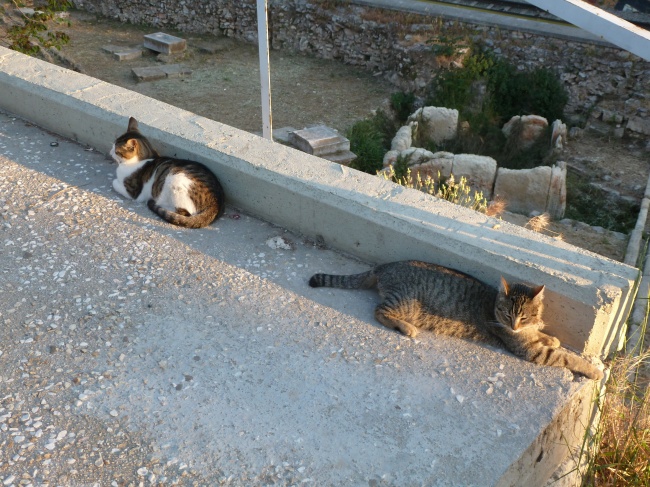 Or across the street, at one of the sidewalk cafes where I sit and have a cool drink, one perches on a concrete block.  The waiter who serves me stoops to pet it and put some food and water down.  It is a kitten, really, and he smiles.  He clearly knows this cat.

On the other side of the Acropolis, where I sit one day waiting for a Hop-On Hop-Off double-decker bus, I first notice the flowers blooming in among the rocks and near-bare dirt.  Then I watch as a small bird lands, ignoring me as it looks for bugs.  In a bit, the bird hops onto a water faucet and dips its head and beak downward into the faucet itself, seeking water. 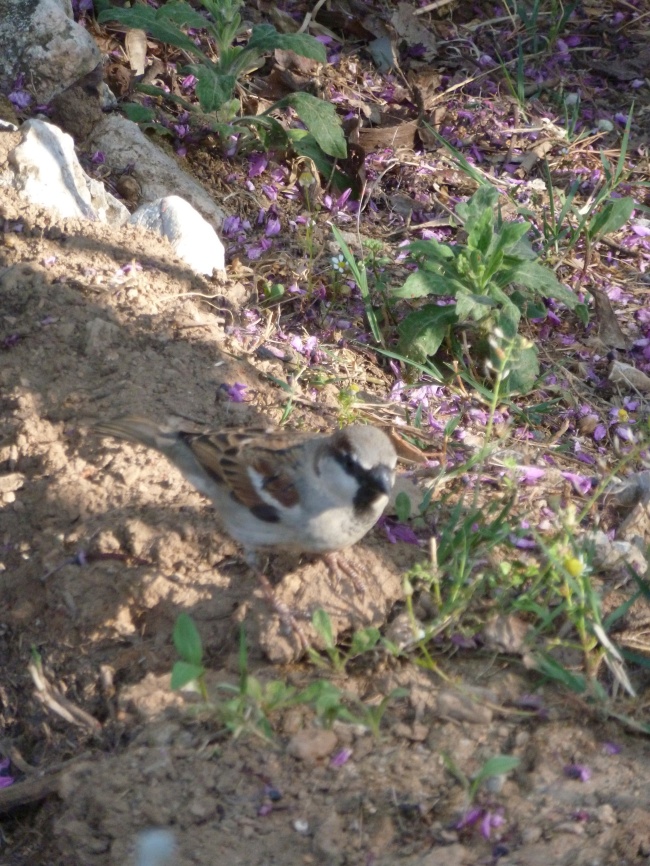 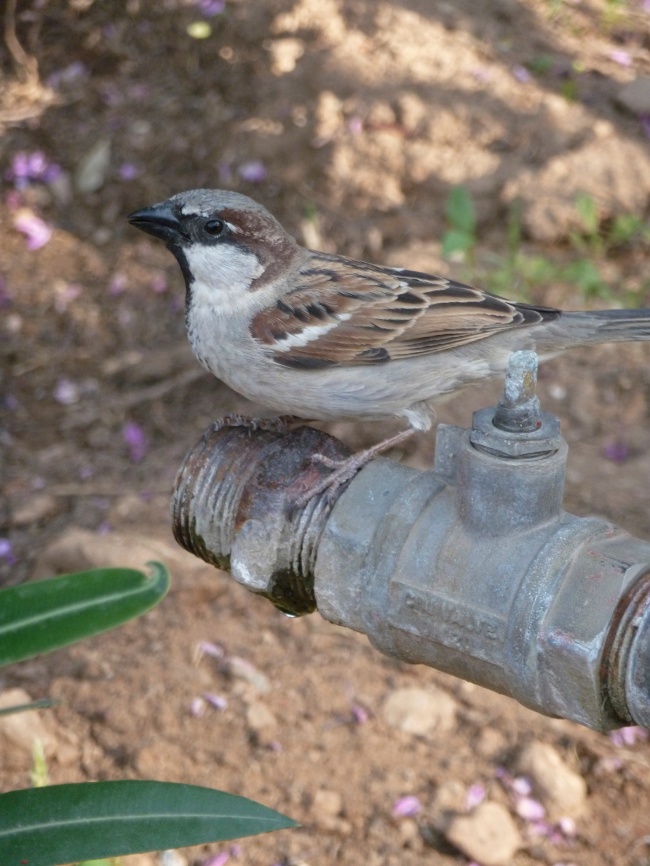 Even at home in the apartment,  I see cats.  They wander the few apartment buildings and the courtyards, sometimes resting in the greenery and flowering vines that provide my balcony with a semblance of a garden.  Sometimes, as this summer, if I leave a balcony door open, one will wander into the apartment and look around. 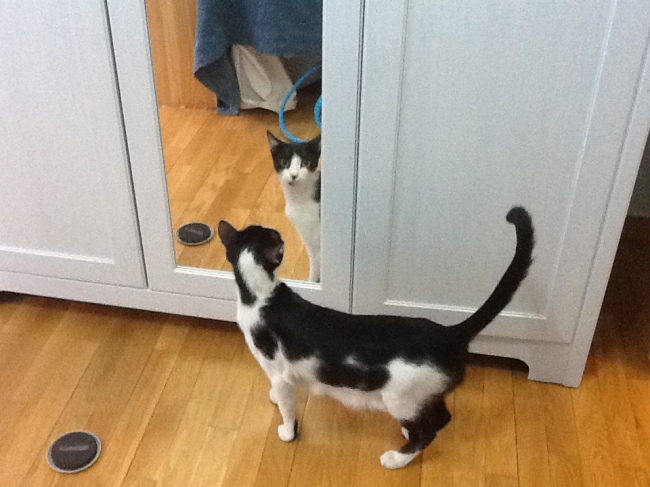 Usually I’m able to walk away from these cats and dogs.  I’m not usually tempted to stop and take any home.  Not usually.

But on the island of Spetses in summer 2009, one kitten clearly had other plans.  I was sitting at a cafe near the harbor, enjoying a diet Coke.  From the side of the cafe, a small kitten crossed the pebbled walkway, zeroing in on me with certainty.  It dodged the feet of the people passing by to head straight for me, winding around my ankles, rubbing against them, then hopping into my lap.  I made the fatal mistake of petting it.  It purred.  I petted it some more.  It then climbed up my arm and curled around my neck, settling on my shoulder like a scarf.  How could I turn it away?  I couldn’t.  I took it back to my room.  I then walked back to town and found food, later located a pet store and bought a carrier.

Friends and I discussed a name for her — for she was a female.  I thought of Bouboulina, a heroine of the Greek War for Independence; she was from Spetses and there’s a statue of her.  Unless I called her “BooBoo,” though, no one stateside would ever get that name, or remember it.  Thus I came to settle on the name Homer.  Yes, I know that we generally accept that Homer the poet was male.  But maybe not — maybe, just maybe Homer was a she.  At least, that’s how I came to name my new pet Homer.  Homer traveled from Spetses with me on a Flying Dolphin, drove from the port of Pireaus in a taxi to my apartment, and made herself at home there.

Once there, Homer made herself at home.  She quickly discovered that she enjoyed the computer — and the warmth of it.  She still does.

In Athens, a friend recommended a vet, who saw Homer and wormed her.  Homer adapted to being an indoor pet pretty easily.  She slept on my chest.  After a week, I realized that Homer had given me something quite different — something no other pet had ever given me.  Ringworms.  It took several weeks — and various creams and strong drugs — to clear up her gift.

She traveled back to Lake Charles with me, in her carrier, under the seat in front of me on two different airplanes.  She was quiet and no trouble.

And even after I returned to Lake Charles, I had a flare-up and had to see my dermatologist.  I also had to treat the other four animals.  Thanks, Homer, for a memorable treat.

Now Homer is acclimated to life in Southwest Louisiana, living with two other cats and two dogs.  She thinks she’s the queen of the universe.

I may look at kittens now, but I resist, no matter how cute they may be.

One of the things that I miss most when I’m away for several months (even a few weeks):  my own pets.  I worry about them.  Friends send me photographs to reassure me that they’re okay.  This past summer, some dear friends took my dogs for the three months I was gone.  Their chihuahua wasn’t thrilled, but she put up with them — as long as they recognized she was boss.  But every day they got to go out into the sun, sleep in the shade, get serenaded to by guitar.  They had a good time.  I just missed them.

So when I see the dozens of cats and dogs roaming Athens, I get a bit of my pet-fix soothed.  At the same time, I worry, too.  Life is precarious for these free-wheeling animals.  Dogs, especially, face dangers; if people don’t like them, or think they make too much noise (even if they’re someone’s pets, in a fenced yard), they’ll toss poisoned food for them.  It’s horrifying to me, imagining the loss.  On islands, some years, there are reports of packs of stray dogs becoming dangerous, or perceived as being so.

Here we have animal shelters and even the pound.  There, though, there are no such things.  Nor is it legal to round them up, to dispose of them.  So they wander, subject to the kindness of those people who feed them and to the cruelty of those who mistreat and poison them.  It’s a confusing attitude, I confess.

Yet the last couple of summers, I’ve noticed more Athenians with dogs on leashes — small dogs, big ones, you name it.  Maybe it’s a popular thing now, to have a pet in the city, one that’s pampered and walked.

Not far from my apartment, on Filolao Street, there’s a pet shop.  The owner puts out some cages on the sidewalk some days for people walking by to look at and perhaps stop and purchase the rabbits or the birds in them.  Song birds are popular here, on balconies and even at shops and tavernas.  Soft bird song often follows you as you walk, though you’re not necessarily able to see the birds.

At times, I stop and take photographs of the dogs or cats or birds.  I’ll probably never see them again, other than these months that I’m in Athens.  But next year, or next visit, there will be others, certainly.

I like to people-watch, true.  It’s probably the voyeur that we all secretly harbor.  It’s fun to listen, to watch, to imagine relationships and entire scenarios from the snippets we understand, the interactions we glimpse.

But life’s not complete without the context.  And even in a metropolitan area like Athens, there is life beyond the human scope.